As one of the thirteen original colonies, the state of South Carolina holds a significant amount of history. By the time of the American Revolution, South Carolina was one of the richest colonies in America. Merchant and planters of the colony formed a strong governing class, with many leaders participating in the fight for independence. Various Revolutionary War battles were fought in South Carolina, including Sullivan’s Island, Camden, Kings Mountain, and Cowpens. On May 23, 1788, South Carolina became the eighth state to enter the union.

The civil war and its aftermath were rather devastating for the state, as it lost approximately 20% of the while male population, and its economy was destroyed. The Reconstruction period that followed the war had much of the state’s efforts geared toward improving the economy, social and political forces.

In the beginning of the 20th century, South Carolina was starting to recover economically. The textile industry started to develop and manufacturers moved to the state, which provided jobs and stability. In recent years, tourism has become a large industry, as many have discovered the state’s beautiful mountains and beaches, providing many recreational activities.

South Carolina’s coastline has many salt marshes and estuaries, as well as various natural ports like Georgetown and Charleston. A unique feature of the coastal plain is a large number of Carolina bays. The economy is also thriving, with a gross state product in current dollars of $153 billion in 2007. Major agricultural outputs of the state include: tobacco, poultry, cattle, dairy products, soybeans, hay, rice, and swine. There are also many venues for visual and performing arts, including the Gibbes Museum of Art In Charleston, the Greenville County Museum of Art, the Columbia Museum of Art, Spartanburg Art Museum, and the South Carolina State Museum in Colombia among many others, which give access to visual arts to the state. There are also numerous historic sites and museums scattered throughout the state dedicated to many events and periods in the history from Native American inhabitation to today. You can find yourself attending some of the countless local festivals throughout the state signifying many cultural traditions and historical events. 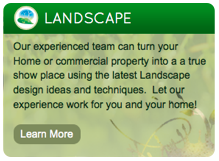 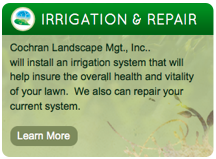 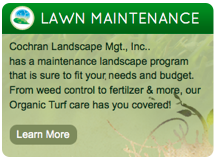 For over 13 years, Todd Cochran and his company Cochran Landscape Management, Inc. has worked to establish their trusting sense of dedication to customer satisfaction throughout the state of South Carolina. At Cochran Landscape Management, Inc. we pride ourselves in our advanced knowledge, expertise, and commitment to quality – we will not stop working until the project has fulfilled not only our standards, but you and your needs as well. We work to customize a beautiful design for your unique lifestyle.

What We Can Do for Residents of South Carolina

At Cochran Landscaping, we provide many landscaping services for your home and/or your industrial area, including:  landscape lighting, irrigation system design, management, and repair.

We also provide a free estimate on our website’s homepage! Fill out your name, email, phone number, and the type of service you need – we will get back to you with an estimate to move forward with your landscaping dreams. Anything you need, we will find a way to make it happen!

Request A FREE Estimate
We have used Cochran Landscape for a year now and have been extremely pleased with their service. Our lawn and landscaping is beautiful and has remained beautiful throughout the last year. They are extremely conscientious…
The Buker's - Easeley, SC
These guys really are the best for any lawn or landscape project.  They are professional curteous and always do a super job. Todd and his managers are so easy to deal with.  I’d recommend them…
Adam B - Greenville, SC
We can’t thank you enough.  We had no idea what was possible with our home.  We now have the outdoor spaces we’ve always dreamed of.  Thank You!
Keith W. - Simpsonviile, SC

Cochran Landscape Management can help you with your residential
or commercial property landscaping and lawn maintenance needs.

Our Services
Get In Touch